Ninety-nine out of one hundred 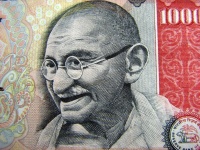 According to my research, the United States has had a military person fire a weapon (on purpose) at someone in a foreign country at least once in 99 of the last 100 years. I don’t say been at war, since many of these incidents were not declared wars.

I’d like to ask that next year we take the year off. No sending the military across the globe to fight. Just for one year, let’s try real peace. Some might say it won’t work, that we need to be adventuring across the globe to keep stability. I’d say it’s difficult to know whether or not it would work, since it’s never been tried. Not in one hundred years.